As promised, here are some images of Walter Womacka’s mural ‘Der Mensch dass Mass alle Dinge’ (Man, the measure of all things) being removed from the side of the Ministerium für Bauwesen in Breite Strasse last year.

The mural was mounted on the front of the building by Womacka and his students from the Kunsthochschule Weisensee (where he was rector) in 1968. It consisted of 350 copper panels covered in ceramic paint.

In summer 2010, Berlin city council announced that the building was due for demolition. It couldn’t find a home for Womacka’s mural (which is a whopping 15 x 6 metres) and was threatening to bin it, until WBM Mitte housing association stepped in at the last minute and agreed to cover the costs of removal and storage. It did so allegedly because Womacka had been one of its tenants since the mid-80s. WBM Mitte also owns the Haus des Lehrers on Alexanderplatz, which is decorated with Womacka’s iconic mosaic frieze, ‘Unsere Leben‘ (Our Life). 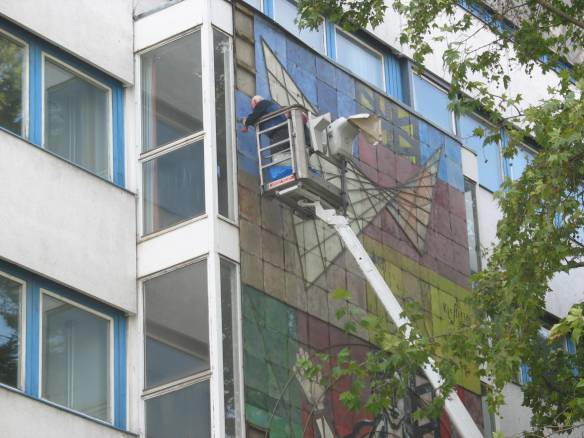 The mural was removed on 4th/5th October 2010. Each of the plates was taken off carefully and lowered down very unceremoniously in an Ikea bag. They were then packed into wooden crates. I expected an audience, but there was no one there, just me, a foreigner with a crap camera, snapping away. It was a bit of an undignified ending for the mural. However much of a stubborn old GDR apologist he was, I’m glad that Womacka didn’t live to see it happen.

The Womacka society had attached a series of posters to the surrounding fence, announcing the ‘Day of the Removal'(!) which included a biography and a list of his works already destroyed since the Wende, as well as the protected & endangered survivors. I was shocked to discover the relief on the Haus des Reisens on the list. No GDR era art, it seems, is safe, unless it’s already survived a renovation (see the mosaics on the Haus des Lehrers & Cafe Moskau). 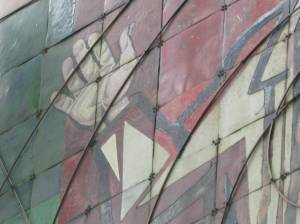 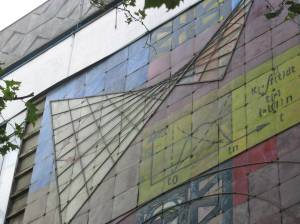 East Germany’s most prominent artist, and the man behind many a brilliant mosaic,Walter Womacka, has sadly died. Gawd rest his soul.